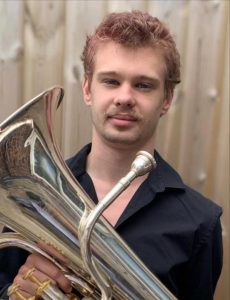 Born and bred in West Yorkshire, Elliott began learning music at 10 years old when he starting learning euphonium and clarinet. At age 16, Elliott began his studies at Leeds Conservatoire (formerly know as Leeds College of Music). He also began lessons with Michael Dodd and had a short stint as solo euphonium of West Yorkshire Police Band before settling in as solo euphonium for Dodworth Colliery Band. After leaving college Elliott was taught by Paul Robinson and in 2019 was invited to audition at the Royal Northern College of Music, where he began his studies soon after. During this time Elliott began to play with with many bands until signing with VBS Poynton in preparation for the Northwest Area Championships (Championship Section). It was around this time Elliott also began conducting and was working closely with Dr David Thornton in lessons at the RNCM.

Aside from playing Euphonium and conducting, Elliott was also working as a composer and arranger. The year previous he had his arrangement of The Star sung by a Hull based Primary school on the radio. He was also playing with many ensembles on Saxophone, Clarinet, Guitar and piano, as well as song writing.

In 2020 Elliott moved back to Yorkshire and in 2021 took the difficult decision to leave the RNCM and work full time through Covid. In September 2021 Elliott will continue his studies once again at Leeds Conservatoire under the tuition of Morgan Griffiths.