After such a long time of not playing together due to Covid-19, we are so happy to be able to rehearse again, and prepare for some summer events.

To keep everyone safe, we have some extra rules to follow, and risk assessments to consider. Please have a read through them (linked below). You will be asked to sign to say you have read and understood them before being able to join us for a rehearsal. It’s worth taking these extra precautions to ensure everyone in the band remains safe.

Can I draw extra attention these rules:
– if you have any Covid symptoms please stay at home and get a test for Covid-19
– we need to have a register of who is at the rehearsal for track and trace – there is also a QR code which you can scan if you have the NHS app
– everyone to remain 2m apart at all times
– please bring your own stand
– please bring a small towel or similar
– please bring your own drink as refreshments won’t be available
– windows will be open if we are meeting indoors, so dress warmly if it is cold.

We would like to recommend everyone get their vaccination as soon as it is offered, and take the lateral flow tests twice a week as per government guidelines – these are available at your local pharmacy.

Thank you for your understanding.

On May 23rd, Cawthorne Brass Band was proud to join with friends from Dodworth Colliery Band to remember the men and boys from the Cawthorne area who perished in the Norcroft pit disaster. 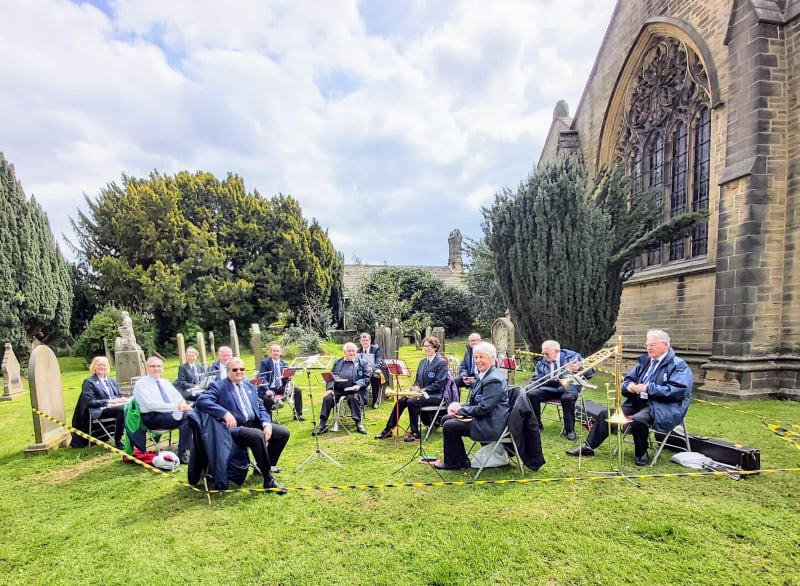 We played a hymn called Gresford, also known as the Miners Hymn, by Robert Saint (1905 – 1950), a former miner. Composed in memory of the Gresford Colliery disaster, near Wrexham, North Wales when an underground explosion killed 266 miners, the hymn was adopted by the National Union of Mineworkers and is played regularly at miners’ gatherings in memory of former miners.

It’s been a very different Christmas this year, but Cawthorne Brass Band have still been out playing carols.

Small groups, distanced, with bell covers. We can adapt!

We’ve had two weekends of carolling, and have really enjoyed bringing a bit of Christmas cheer to the local area.


Our trip to Hall Green in Wakefield was particularly special, as it was by special request from a band friend and follower, Dr Neil Verner. He has Motor Neurone disease, and is currently developing a new treatment for Motor Neurone Disease.

The Band have donated £100 towards his GoFundME campaign, where he hopes to raise the £95,000 needed to fund this life saving research.

All that remains to be said is that, this year especially, we wish all of our Band friends a very Merry Christmas and a Happy New Year!!

I sincerely hope that you are all well at the start of a difficult time with coronavirus and possible isolation.
It has come to the point where unfortunately we need to cancel band rehearsals.
Some of our group may be considered high risk, some will want to avoid unnecessary outings and some may wish to continue as normal. It’s very likely that decisions will be out of our hands in the coming weeks so I’d like to think we are being prudent at this early opportunity and saving unnecessary worry.
Please keep in touch with one another through social media/ phones. Take care of yourselves, don’t worry about band and let’s hope we’re back together all fit and healthy as soon as possible.
We will let you all know as soon as anything changes.

What a Christmas we had!

Cawthorne Band had a wonderful festive period. We joined Cawthorne Choral Society for a spectacular Christmas Concert, ‘The Stars of Christmas’, with a great variety of music and even some enthusiastic audience participation.

We took part in the Cawthorne Christmas tree festival, with a theme of International peace. Each tree was themed around Christmas in a different country. Our tree had a Kenyan theme, decorated with black, green and red, the colours of the Kenyan flag, and many toy African animals:

We enjoyed playing carols at the ‘Spirit of Christmas’ service, where all of the decorated trees were lit up.

There were many traditional carol sing-a-long occasions throughout December too, including lots of the old favourites, and some of the local carols. 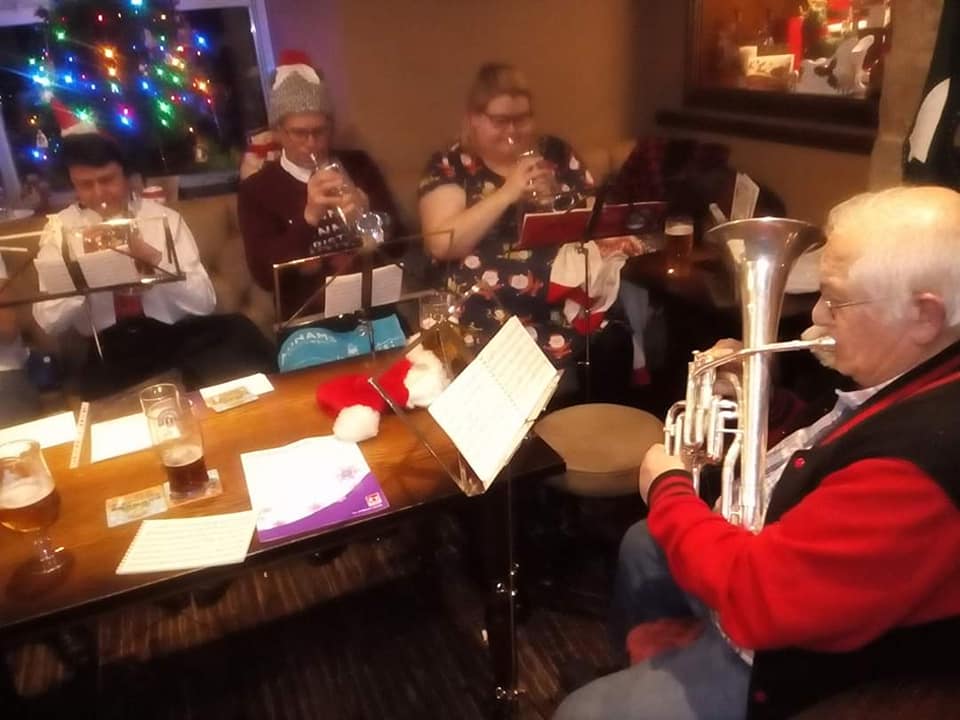 We also enjoyed playing at Legacy Church Christmas service, where we even got some help from a passing elf! 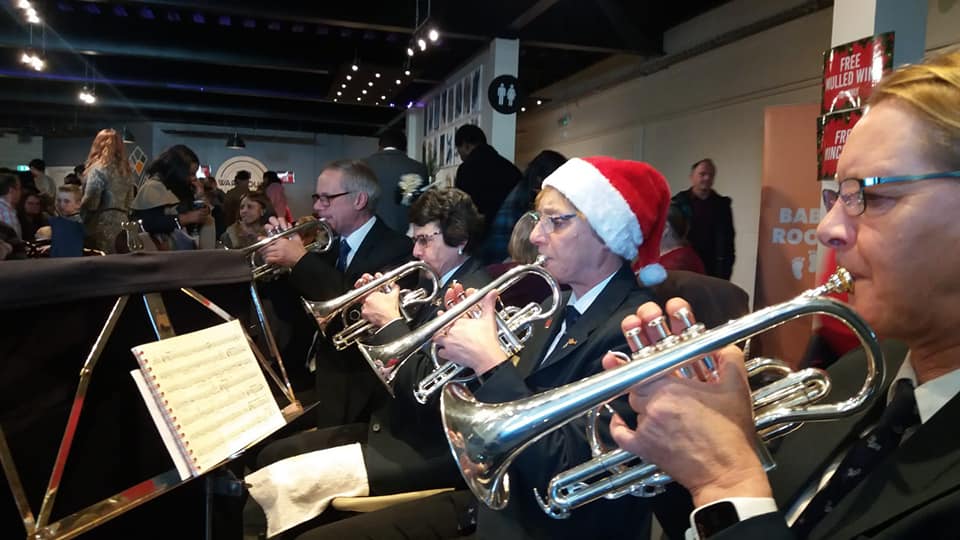 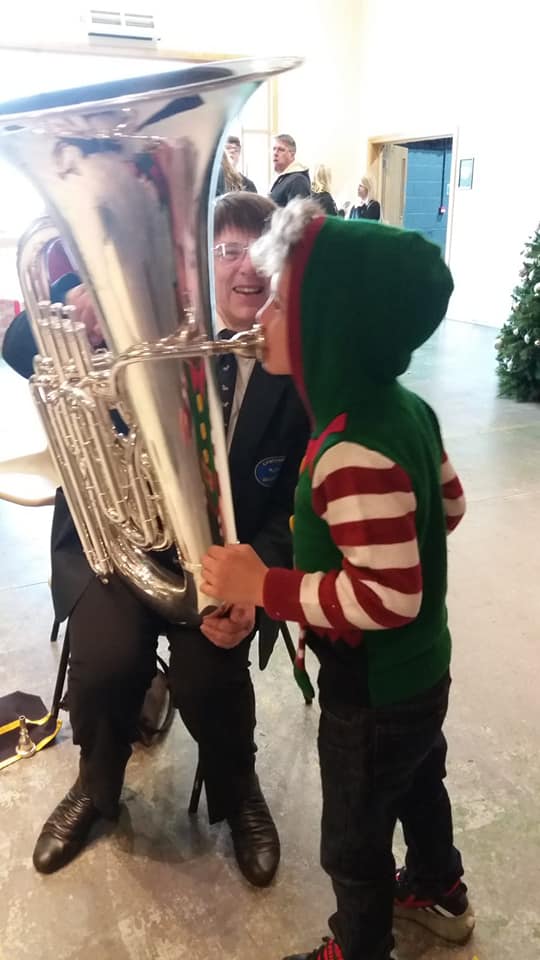 Merry Christmas everybody, and a Happy New Year!

At the end of May, Cawthorne Brass Band and friends had a wonderful day out to Scarborough. It was really lovely to go out together on a coach trip to the seaside. Everyone had a lovely time at the beach, where ice cream and fish and chips were consumed, and at least one sandcastle was made. And of course, it wouldn’t be Scarborough without a donkey ride!

For the afternoon we moved on to the hidden gem that is The Scarborough Fair Collection. If you have never been, we all thoroughly recommend it. We had such a wonderful time looking at vehicles from years gone by, and riding on Fairground Rides dating back to 1893!

There was also an impressive collection of Mechanical Organs dating from the 1900s to 1984, and not just one, but two Wurlitzers!

After Scarborough Fair, we headed back to home on the coach, via a fantastic carvery in Wakefield.

An event that should definitely be repeated!

Last weekend, we took a step back in time, nearly 60 years, to the Swinging Sixties!

Cawthorne Village Hall was transformed, ready for a good old-fashioned sixties shindig. There were sixties sweets, and drinks like cloudy lemonade, cream soda and bitter shandy. People were given a quiz sheet as they entered, and made themselves at home around the tables, ready for an entertaining night.

Everybody made a great effort with the costumes, it really made us feel we were back in the sixties. Alyson and Gwyn won the prize for best dressed on the night.

After a few bits of sixties music, it was time for the fish sellers to bring around cockles and whelks – actually they served that good old party favourite, prawn cocktail.

Everyone knows chips taste better out of a newspaper cone. I don’t know if it was that, or the amazing cooking skills of our resident ‘Chip King’, but they were certainly delicious!

Here Gwyn, dressed as a Cub Scout, and Rachel help to serve. Gwyn’s dedication to this costume won him a prize; it even includes a genuine badge that he wore in the sixties, when he was still in the Cubs.

And to finish, no sixties party would be complete without Black Forest Gateaux

After all the music was finished, and all the delicious food eaten, there was just time to draw the raffle, and mark the quiz sheets. A wonderful evening. I hope our audience had as much fun as we did in the band!

On Thursday we said goodbye to long standing member Alan, and Christine who has been invaluable behind the scenes and supporting the band. They will both be missed.

They have shared this message:

Alan & I would like to Thank you all for our gift, and send off on Thursday. We have both enjoyed coming along and we were made welcome from the start, sure Alan will keep up playing and no doubt I will get involved with a new band somehow!!!

So, once again thank you, we shall miss you all, but will be following you to see where you are when we come to visit family. Best wishes, and good luck with the 60’s night. 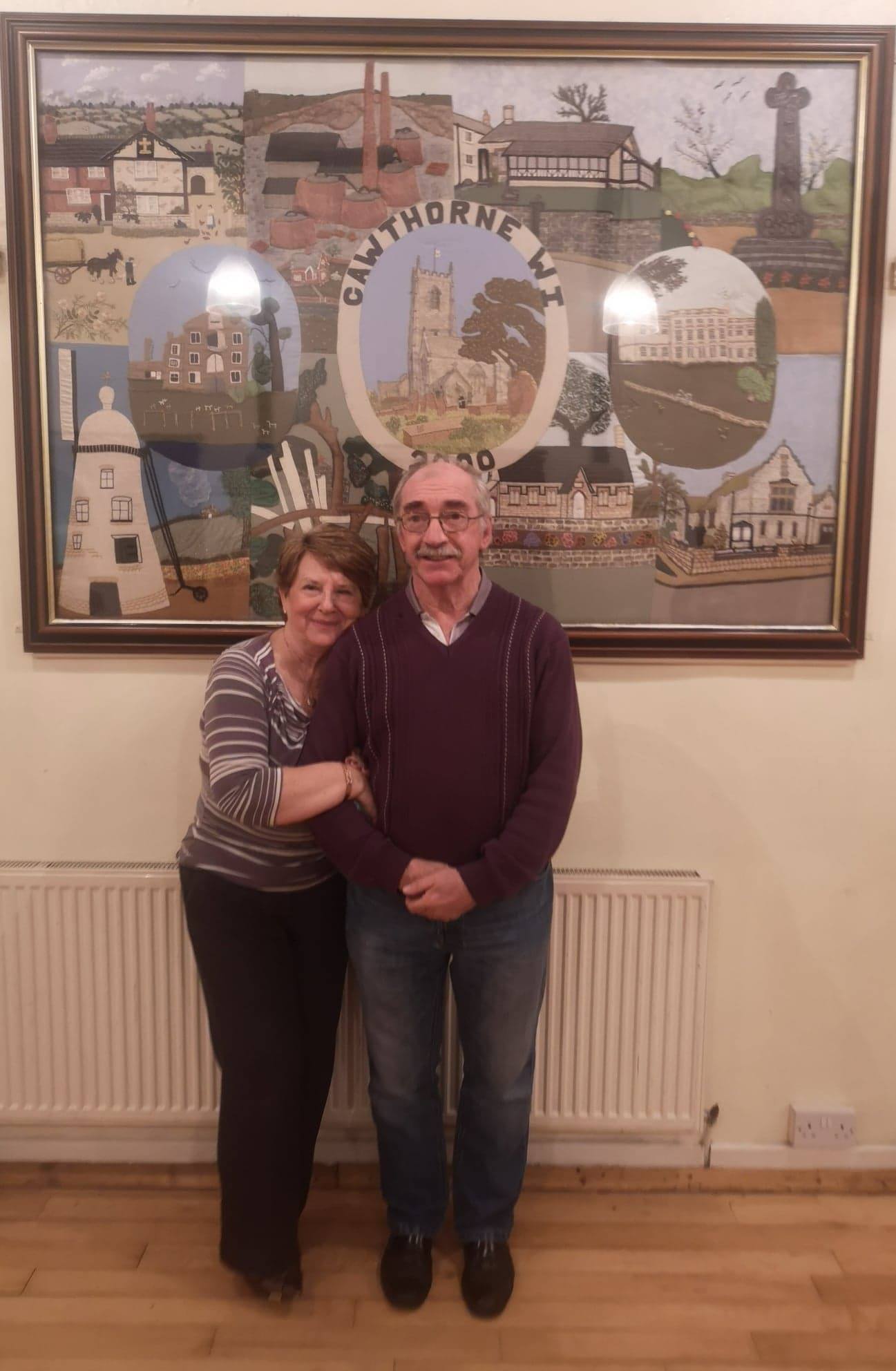 Special thanks to our two guest players, including one all the way from Sullivan, Indiana! 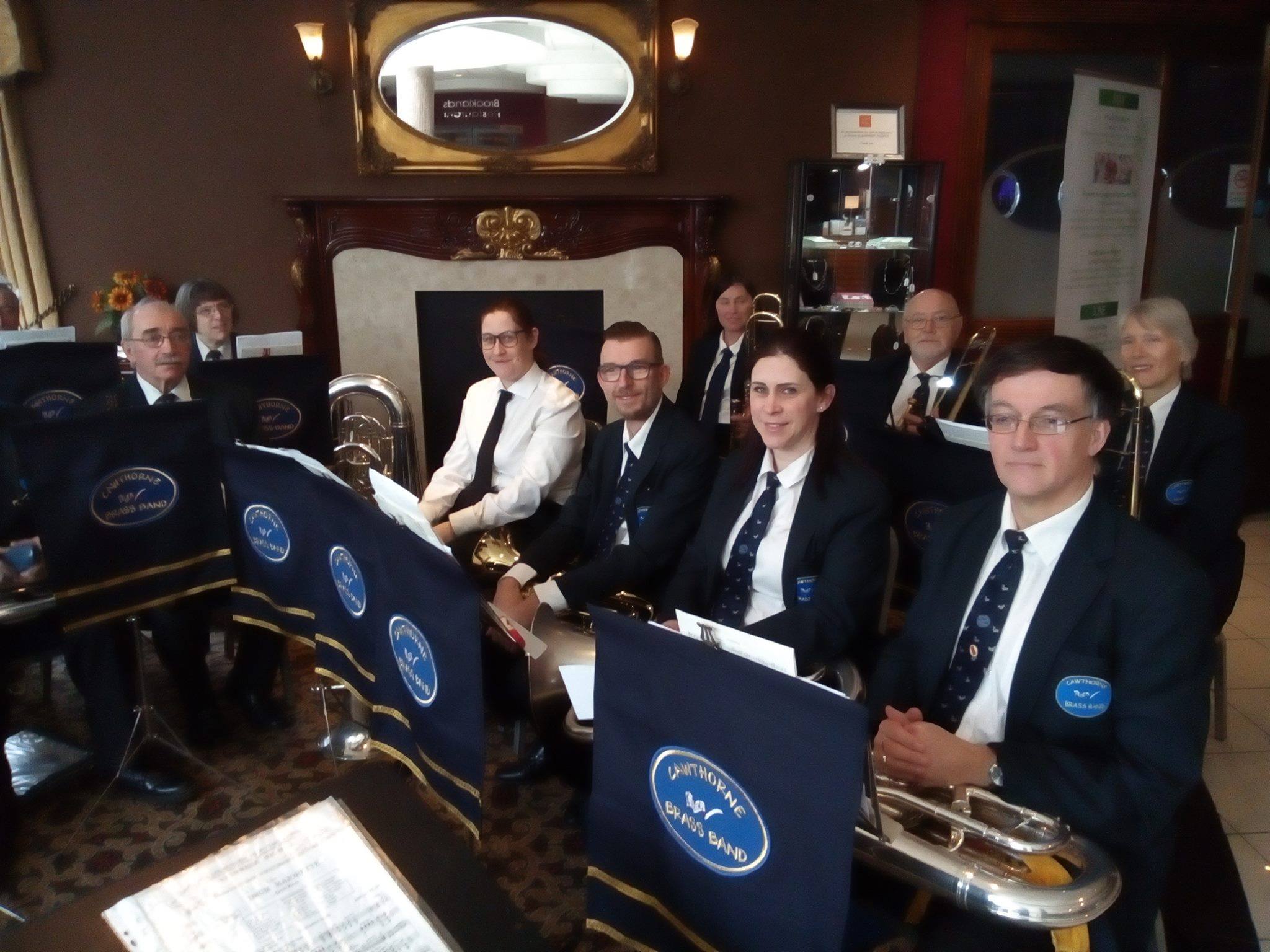 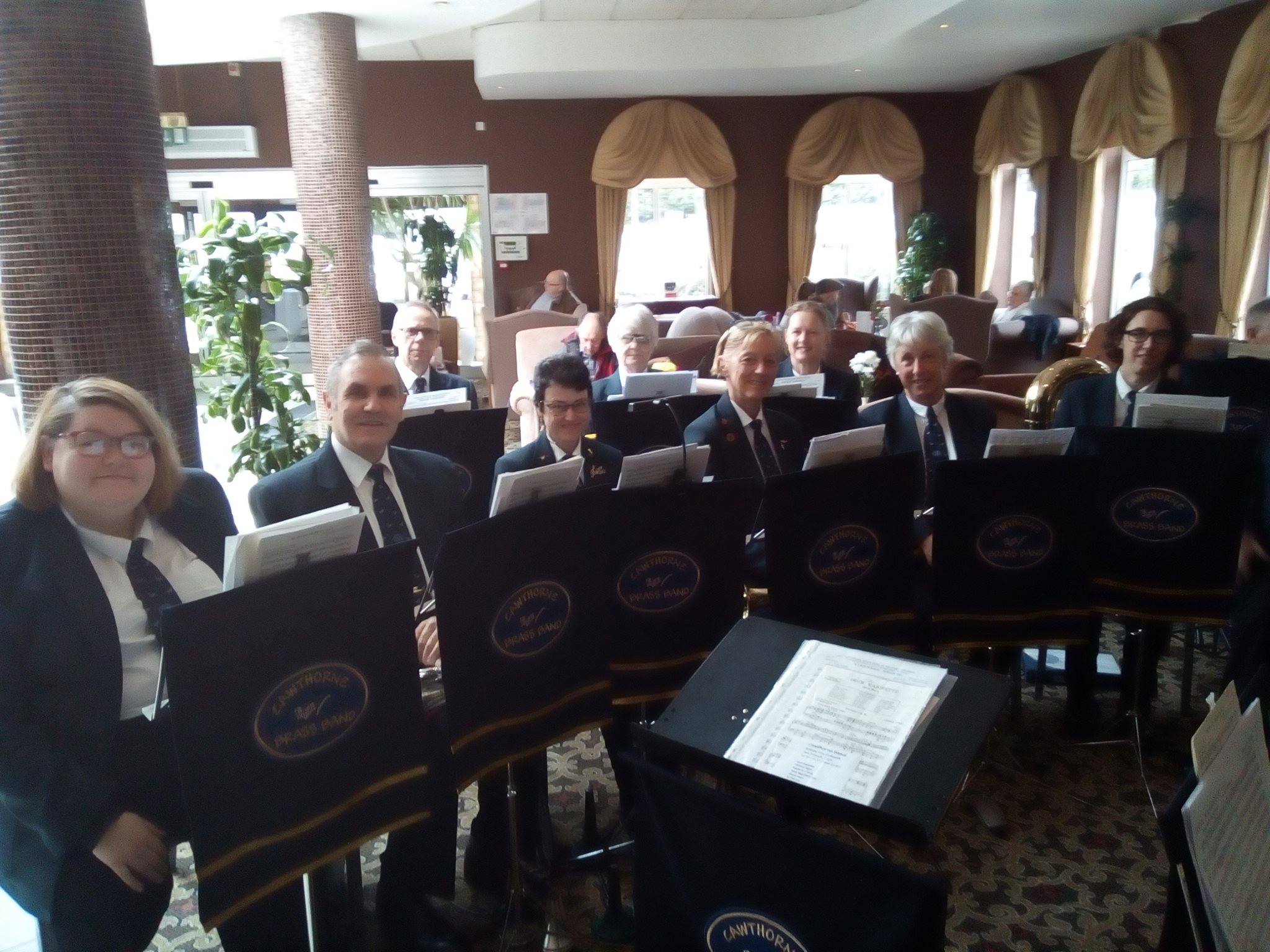 Cawthorne Band had a great time playing carols at The Travellers Inn in Oxspring earlier in December. What could be more festive than a Brass Band playing carols in a traditional pub?

Join us on December the 18th for the next carolling session. 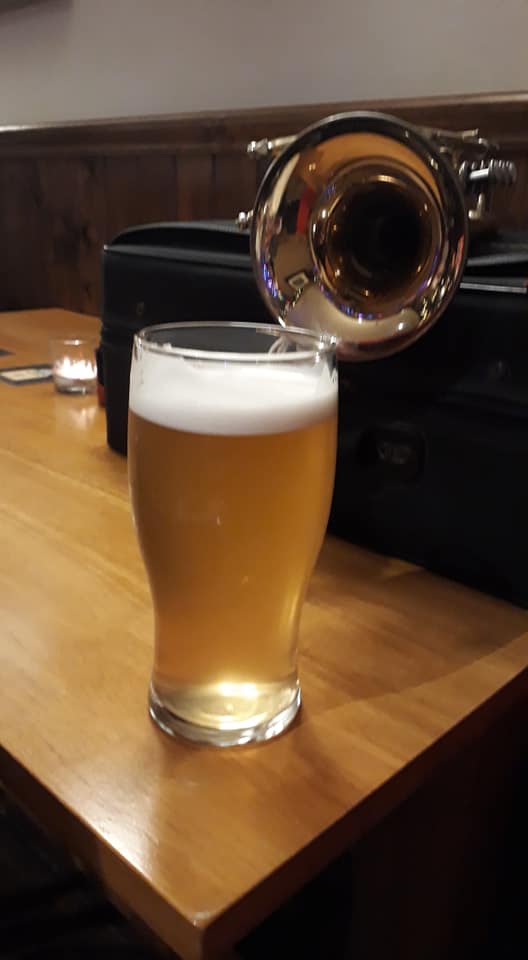